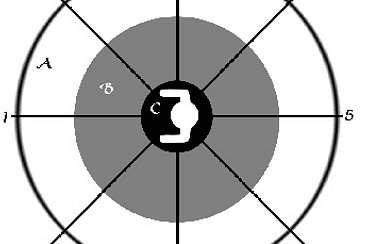 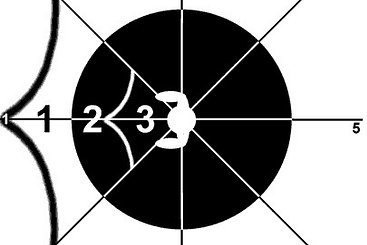 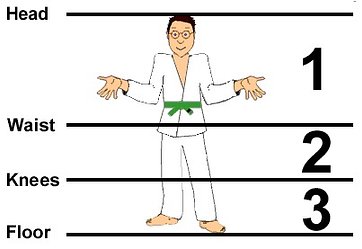 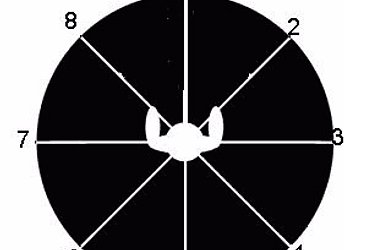 To learn Ju-Jitsu, the student must first understand themselves and their relationship with the space around them. Space moves around us as we move through it. Time and distance is also a part of the equation.

Distance of the Attack

Distance includes three areas. The first (A in diagram) is the distance that is not physically reachable by either of the combatants, the attacker (uki) or the defender (tori). In this field, no direct technique will address these kinds of attacks. This distance would include firearms and other projection weapons. To avoid these attacks, the tori must use awareness, common sense, and the knowledge of avoidance.

The second distance (B) is the longest distance at which the uki can strike any part of the tori. For example, if the uki wields a club, the second distance is from the end of the club to the closest striking point on the tori, say the forward hand. At this point, you are in fighting range. You must meet the attack or avoid it entirely.

The third distance (C) is when the uki and the tori are in range to grab and grapple. Both uki and tori are able to claim the best and the worst of the situation. This is the area where technique and spirit come into play.

Another concern is the direction of the attack. There are eight directions from which an attacker may choose to attack. It is impossible to face all eight at the same time. The tori must be able to sense the surroundings and use whatever is in those surroundings for an advantage, including the uki. By not staying in the same spot, the tori decreases the uki's useable distance. The tori can also redirect the uki's attack to reach a more favorable position.

A third consideration is the vertical placement of the incoming attack. Ju-Jitsu has three general vertical zones: from the head to the waist (1), from the waist to the knees (2), and from the knees to the floor (3). It is important to keep in mind which attacks and defenses are effective at different levels. When both the tori and uki are standing, punches are most effect at level 1 and occasionally at level 2 (a strike to the groin for example). Kicks are confined almost exclusively to levels 2 and 3. A punch to level 3 or a kick to level 1 places the uki significantly off balance. Likewise, grapples are concentrated at level 1 and sweeps at level 3.

Keep these vertical levels in mind when an uki restrains the tori in some way. For example, if the tori's hands are immobilized, such as in a rear double hand grab or bear hug, the legs are still available for kicks. Areas in levels 2 and 3 (groin, knees, feet, etc) are still open targets for the legs. It would be a waist of effort and energy to attempt to use the arms in level 1 until the tori is no longer immobilized.

Once you have the distance and the direction of the attackers, you must then concern yourself with the force. Most martial artists throw a punch using the hip to produce speed and power. The punch coming from the front of the uki is delivered in a straight line. From point-of-start to point-of-delivery the punch cannot change direction. This makes the speed and power unimportant. If you move out of its path of flight, the contact punch will miss. Force, or power, is always the greatest at the end of the punch or kick. By moving away from the end, you decrease the time and energy it takes to avoid the punch. You move slower and take less effort to move the arm. Block the arm at the wrist with a parry and little force.

When a punch is thrown, the target is in a direct line from the uki's shoulder. Once the punch is thrown, you can block or evade. A hard style block takes the same force and speed to stop the punch as it does to throw the punch. By stepping to the side and redirecting the arm, you can evade, or parry, with minimal effort.

Tai-sabaki (body movement) is one of the most important foundations for the art of Ju-Jitsu. As the defender, we must think of ourselves as the center of a circle, with our extremities as the spokes that radiate from our body to the edge of the circle. If an attacker strikes at us, we need to move out of the direct line of the attack. We deflect the strike, while continuing our direction in a circular motion. For example, rotating from position 1 to 6, or 1 to 3. Pivot only as much as you need. All of these movements should flow in a circular motion. In this way, rather than using all of our strength and energy, we are actually using our attacker's momentum in combination with our own. When going in a circular motion, follow the way in which your attacker's momentum is propelling him. Another way of using Tai-sabaki is to change the direction of the attacker. Once you have your attacker off balanced, the circular motion may be changed by pivoting the other way. Example: 1 to 5 clockwise then all the way around to 7 counter-clockwise. Make sure you use the direction of the attacker's momentum. This is usually less than 90 degrees to the right or left, or up or down from the direction of the attacker.

Another way to change the attacker's direction is by using Happo-No Kuzushi, or eight directions of off-balancing. Kuzushi is the most important aspect of Ju-Jitsu. It is also the most misunderstood. There are eight points, or directions of off-balancing. If the uki is executing a right punch, his body is leaning towards his right (direction 2 in the figure above), by pushing his opposite shoulder back and pulling his right shoulder in the same direction, you will cause the uki to go off balance in the direction of the punch. For each direction you lead the uki, there will be an opposite lead to that direction. By gently leading the uki, you can make them go in the direction you want. Once the uki is off balance, you have the throw.

Confrontation, in any form, is stressful. The best way to handle a physical altercation is by avoidance. You must be prepared. Once you have set yourself physically, you must prepare yourself mentally, by getting into the proper mind set. You must accept a totally different mental outlook, than you're normally accustomed to. You must be prepared to get hit, or to do the hitting. Fight back, no matter what the situation is. Do something. Remember that fighting back can include running away. Stay alive and safe.

You must be ready to act, perform, and follow through, with whatever must be done, when it has to be done. Stay alert and aware of your surroundings. at all times. There is only one rule in an attack situation, and that is to WIN. There is no such thing as dirty fighting while tying to protect yourself. Win at any cost, in any way, by any means, and ignore decency, fair play, sportsmanship, compassion, and humanity.

When walking in an area, familiar or unfamiliar, you should become instantly suspicious of even a distant approach by a stranger. This should put your mind into defensive mode and make you ready if an attack comes. Know when to strike, where to strike (see chart), and how to strike.