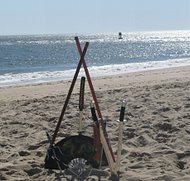 The Ju-Jitsu club through Maru Martial Arts has permission to use and train with weapons. Please obey the rules so that we do not loose that privilege.

Weapons may be trained with at practice and are not allowed within Loyola Residence Halls.

Weapons must be in a case when you are not training.
Do not let anyone outside the club use or touch your weapon.
Keep your weapon in your room, in it's case and put away our of sight.

You may train in your room but you are responsible for your weapon.

If you have your own weapon you must inform Hanshi. All rules apply.

You may transport weapons in their case to and from class.  Do not take them to class.

If you are asked by anyone about why we can have weapons, refer them to me.  Do not try to explain policy to them.

Staff
The staff is a required weapon. With the study of the staff you will learn techniques that will help you with other weapons. The staff gives you balance and coordination along with controlled eye-hand control. The staff is among the first tools used by early man to help him survive. It is said that around 517 A.D., the Zen Buddhist priest Daruma Daishi brought into effect fluent use of the bo. Around 1314 A.D., Ryukyu Kovu-Do first gained attention when the Japanese government passed laws barring inhabitants of the island from owning or possessing any sort of lethal weapon. The Staff itself originated with the tenbin, a stick held across the shoulders, usually with buckets hanging from each end. In my opinion, the staff is a good weapon because it makes you to learn to use both hands.

Escrima/ Arnis
The use of the escrima sticks is again an off shoot of the staff. One of the early known forms was called, Tjakalele, or Indonesian fencing. When the Philippines were invaded by the Spanish invaders, the deadly fighting skills of the Filipino warriors nearly overwhelmed them, and they dubbed the native stick style escrima (skirmish). Even though the art was outlawed, the techniques did not disappear. They were preserved in secret in the form of dances or mock battles, staged in religious plays, known as, moromoro. Arnis incorporated three related styles: Espada Y Daga (sword and dagger), which employs a long blade and a short dagger: Solo Baston (single stick), and Sinawali (to weave), which used two sticks of equal length, twirled in a weaving fashion for blocking and striking. By learning the escrima sticks, you also learn the moves for the single and double broad sword.

Broadsword / DAO
Designed to lay the wind, the curved blade of the broad sword ranges in length from 25-29 inches: the handle from seven to to inches: and the guard about one and a half inches beyond the perimeter of the handle. The width of the blade varies from sword to sword, averaging two inches near the guard, to three inches by the crescent, its widest part. The blood grooves near the back edge of the blade are etched in for stability, and for allowing air into the wound for a quick pull out. In ancient China, there is a saying that the Dao (broad sword) is the master of all weapons. Because of the way the Dao is used, it has proven to be have more advantages than other weapons. even a slight sliding across the enemy's body would cause more serious injury than from the hammer, the pole, the spear, or the whip. Since the broad sword is sharp only on one side, placing the spine of the sword close to the body can prevent the weapon from causing injury to the holder.

Tai-Doa Long handled broad sword.
The longer handle was at first use by fighters on horseback. The swordsman was fully armored and riding on horseback, the lower body movement is being replaced by the horse. That is why the swordsman does not have to suffer from the weight and length of the weapon. The Tai-Doa comes in different lengths from a two foot handle to over six feet. A longer handled Dao can be compared to the Japanese Naginata, a weapon used by the samurai warriors' wife to protect the home in the absence of the her husband.

Katana weapon of the Samurai warrior.

The deadly blade was feared and highly honored. By studying the Katana, you not only learn the skills of the blade, but also the ceremony and traditions that come along with it. The Katana is a very involved weapon, used in Japan for over many generations. The tradition was kept in the family with training and knowledge handed down from father to son, then to his sons and so on.

The practice of the Tai Chi Dao is consistent with the way of Tai Chi Chuan. It gives the same good effect to the body as Tai Chi. The waving of a sabre is more interesting and exciting than using two empty hands.

Tonfa
The Tonfa was originally a wooden handle that fit into a hole on the side of a millstone used to grind rice and other grains. The handle, which was easily disengaged from the millstone, became a very effective weapon of defense. Continued practice with the Tonfa can help improve balance, coordination, and physical strength.

Naginata
A weapon made of a long wooden pole with a sharp blade attached to the end. It used to be the weapon of warrior-monks to defend the wealth and property of Buddhist temples, and also the weapon of ladies of samurai families in olden days. Today it is used only in Naginata matches.

Kendo
The Japanese martial art of swordmanship or fencing. In a Kendo match, the two contestants equip themselves with protective armor and wield a bamboo sword in place of a real weapon. Points are awarded for effectively hitting any of three parts of the body--head, trunk, forearm--or for stabbing the neck with the bamboo sword. It is won by the first contestant to score two out of three points.

Jutte
These are implements that were used by the samurai as well as the feudal-era police. They were used for trapping the blades edged weapons as well as jabbing, striking, and trapping fingers.

Kama
Kama was originally a farming tool to weed plants. Because the farmers were not allowed to carry weapons they used their tools to defend themselves. This weapon is most known for its use by ninjas.

The Sai
is a weapon that has gained popularity because of its practicality and effectiveness as a weapon of the martial arts. The Sai was originally used to plant rice and is still in use in some parts of the world today.

Nunchaku
The Nunchaku are two sticks with a small cord or chain between them. Originally it was used as a farming tool to thresh grain. and the farmers started using them as weapons to defend themselves.

The Yari
The Japanese spear didn't differ largely from that of other countries. During the Civil War Era,  the spear was the most standard weapon of bushi.

Butterfly Swords
Two short swords working in unison and with deadly results. The Butterfly  Swords were a common, southern style weapon and had the ability to be flipped hiding it from an enemy. This form naturally increases a practictioner's hand and arm speed, while strengthening one's wrists. This weapon and any form for it are the trademarks of short, but quick techniques.

The Yumi
The Yumi (Japanese bow) was the main battlefield weapon for the bushi until the 1530's. A typical Japanese bow is 2.3m length, made of bamboo with a string of silk and pine resin. An arrow is made of bamboo and bird feather. Bamboo is the best material for bow in the plant kingdom. Though inferior to modern composite archery bow in penetration and accuracy, it was a deadly weapon, too. Until musket was brought from Europe in 17th century, the bow was most respected by bushi.

Chakram
A throwing disk derived from Hindu Mythology, the fascinating Chakram (also known as a throwing quoit) is one of the most unusual, but elegantly simple, throwing weapons ever devised. Still carried today in groups of 6 or 7, around the left arm by the fearless Akali Sikh Warriors, the Chakram is thrown like a frisbee. Skillful soldiers can hurl this disc up to 80 feet with deadly accuracy. Hindu God Vishnu (the Preserver) is depicted holding the Chakram, as has Lord Krishna and Indra (God of Kshatriyas, the warrior class). The Chakram has been used with all sorts of varying sizes, thickness and proportions over the centuries.